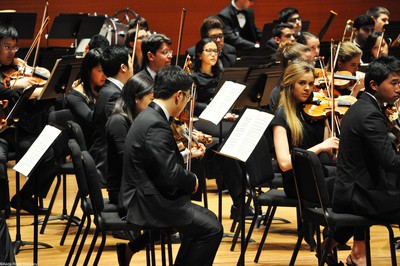 Founded by composer Edward MacDowell in 1896, the Columbia University Orchestra is the oldest continually operating university orchestra in the United States. The principal mission of the Orchestra is to expose talented student musicians to the highest level of orchestral repertoire.

Founder Edward MacDowell's influence was far reaching, both at Columbia University and beyond. His vision for the arts at Columbia would finally be recognized, with mandatory arts requirements and a wide range of performance ensembles. Perhaps the most noteworthy is the Columbia University Orchestra. Originally founded in 1896 as the Columbia University Philharmonic Society, MacDowell started the 25-member group. It was not until April 21, 1899, however, that the orchestra would debut under the direction of Gustav Hinnichs, in the Mendelssohn Theatre (now demolished in midtown Manhattan). The group would go on to participate in a "Grand Concert" at the Barnard Theatre in the 1900-01 season with other student ensembles. There were 4 concerts in 1902, and 6 in 1903, including one at the Installation of Nicholas Murray Butler as President of Columbia University. The CUO's first out-of-town performance occurred at Odd Fellows Hall in Hoboken, New Jersey that year. The number of performances remained at a consistent number for the next few years.

There seem to have been a few bumps in the Orchestra's history between 1909 and 1913. An article in the Columbia Spectator on November 25, 1909 discussed the rivalry between the Philharmonic Society and Frank E. Ward, the Chapel Organist. Apparently disgusted with the procedures of the Philharmonic Society, Ward had called for the formation of a new, additional orchestra. This would not have been serious except for the fact that the Philharmonic Society was on the brink of losing many of its members to the radical ensemble. In the end, however, all ended in peace and Ward returned to his organ. It also seems that there were no performances between 1911 and 1913. This was most likely due to disinterest or lack of student leadership. Of the few records found in the Columbia Archives, it is hard to discern what happened exactly. We do know, however, that the CUO returned in full force in 1913 under the direction of H.H. Fuchs. In 1916, the name was changed to the Columbia University Orchestra, only to be changed to the Students' Orchestra in 1917. (Today, it is back to the Columbia University Orchestra.) Also in 1917, women were allowed to join the ensemble. It is unclear just how many women joined at that time, but we do know that in 1934-35, there were just 5 women members out of a total of 51.

The CUO has traditionally brought new compositions and composers out to the public. Composers who have had their works debuted by the CUO inlude Bulent Ariel, Maurice Wriht, Jack Besson, Otto Luening, Charles Wuorinen, and Henry Brandt. One of the more interesting pieces performed by the orchestra was "Rhapsodic Variations for Tape Recorder and Orchestra" by Otto Luening and Vladimir Ussachevsky, Professors of Music at Columbia in the 1950's. More recently, the CUO has toured cities and colleges throughout the United States. Under the current direction of Jeffrey Milarsky, the CUO has continued to be one of the most prominent university orchestras in the country.

As the CUO is an official course within the Department of Music, undergraduates will receive 2 credits per semester if accepted into the Orchestra.

CUO in the Directory of Classes